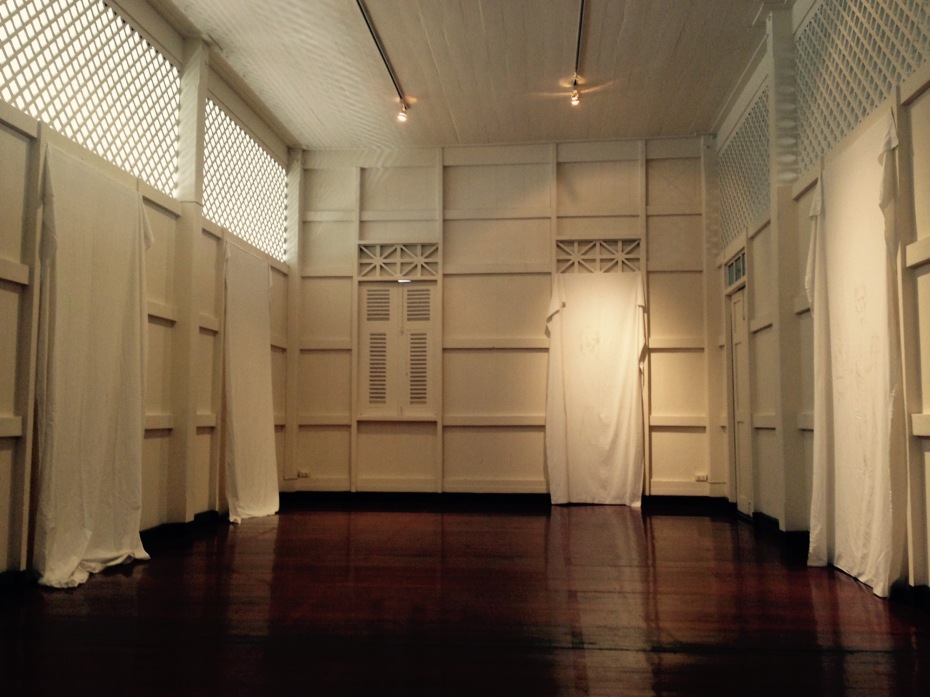 Vestige is an installation and durational performance by Việt Lê, an artist based in California. Vestige explores the resonances of H Gallery’s architecture, a 19th century Anglo-Thai edifice that has variously functioned as a church and orphanage in Bangkok’s Christian Quarter. Lê uses this backdrop as a catalyst to refract fragments of Southeast Asia’s histories.

2014 is the 40th anniversary of American military engagements in the region. Lê will occupy H Project Space for a period as a form of research and also create a devotional object in a form of a beaded curtain. The public are invited to contribute to this meditative process by donating their own beads and string, and to also provide other types of gifts and offerings. Throughout the time of the installation the windows and doors of the space are covered with sheets which are hand-painted with collective and personal images from the region’s past. These ghostly presences, accompanied by the communal activity of the artist’s interaction with the public summon lives and deaths from Southeast Asia’s troubled histories including the story of a lovelorn youth who committed suicide in the building of H Gallery.

Vestige also sees Lê develop the second installment of his internationally celebrated LOVE BANG! music video trilogy. Titled ART/break! and featuring time-travelling and star-crossed characters based on the artist’s memory of figures from refugee camps in Thailand, the video interweaves the past and the present with a humorous homage to Thai and Vietnamese tunes and Western pop songs. These sounds are ever-present on the streets of Southeast Asia.

Works-in-progress will also be showcased.

Vestige explores metaphors that can face the fractured topographies of Southeast Asian identities. Divides and connections are occupied and announced, between the physical and metaphysical.